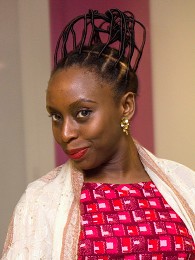 Chimamanda Ngozi Adichie was born in the city of Enugu, southeast Nigeria, to a Christian Igbo family. It was the Igbo that attempted to form independent Biafra in the 1960s. Her given name means "My God will not let me down" in Igbo. She grew up in the university town of Nsukka where she lived with her family and five siblings in a house that had previously been occupied by the well-known author Chinua Achebe. Both parents were employed at the university where her mother was the first female registrar and her father taught mathematics and statistics. Adichie’s parents wanted her to become a doctor, but she would rather be an author. She enrolled at medical school, but when she was nineteen she moved to the United States where she studied communications and political science at Drexel University, Philadelphia. She also has a degree in creative writing and in 2008 she received a Master of Arts degree in African studies from Yale University. She now lectures at Princeton and has been living between Nigeria and the United States since the 1990s.

This is an abbreviated version of the article about Chimamanda Ngozi Adichie. Please Log in to get the full view of Alex Dictionary of Authors.