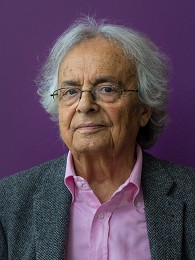 Adonis, or Adunis, is the alias of the Syrian-Lebanese poet Ali Ahmad Said. Said was born in a poor farming community in the village of Qassabin near Latakia in Syria where his family belonged to the Alawite minority. He went to school in Tartos and Latakia and later read philosophy at the University of Damascus. He spent one year as a political prisoner and left Syria in 1956 when he moved to Lebanon with his wife; he became a Lebanese citizen in 1961. In 1957, he founded the influential literary periodical Shi'r (Poetry) together with the poet Yusuf al-Khal. Ten years later he founded Mawaqif, an outspoken, groundbreaking magazine for contemporary Arab poetry. At the beginning of the 1960s, Adonis received a scholarship to the Sorbonne and he was appointed professor of Arab literature at the Lebanese University in Beirut in 1971. He received his doctor's degree from the St. Joseph University in Beirut in 1973. Adonis has also taught at a large number of Arab and Western universities. He stayed in Lebanon until 1984 when he moved to Paris with his wife, the literary critic Khalida. The couple has two daughters.