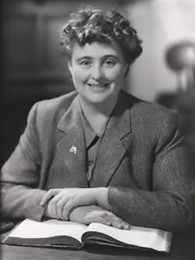 English crime writer born in Ealing, London, as the daughter of Herbert John Allingham and his wife and cousin Emily Jane Hughes. Both parents were writers and journalists who regularly contributed to various weekly magazines. Herbert John was the editor of the New London Journal as well as the Christian Globe.

This is an abbreviated version of the article about Margery Allingham. Please Log in to get the full view of Alex Dictionary of Authors.