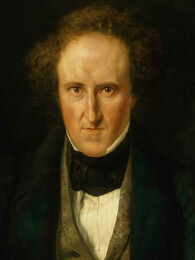 The presentation was last updated November 25, 2021

Swedish author, born in Stockholm and raised at the estate of Antuna some distance to the north of the city. The father belonged to a well-known family of public officials. After studies at home Almqvist went to Uppsala, became a schoolmaster, and worked the next few years as a tutor and public official in Stockholm. He was early on influenced by Herrnhutism and Swedenborg. In 1823, he left his career in the public service, where he did not feel at home, and moved the year after to Värmland, married and became a farmer. Already in 1825, he was back in Stockholm again, where he supported himself by giving lessons and by various employments. In the years 1829-41, he was the headmaster of Nya Elementarskolan. In this period, he wrote some ten textbooks in languages and mathematics. Almqvist was ordained in 1837. From 1839 he collaborated in Aftonbladet and other newspapers. Due to his radical ideas he was forced to leave his position at Nya Elementarskolan, and instead he became a professional writer in the 1840’s, with considerable journalistic activity and diligent work as a novelist.

This is an abbreviated version of the article about Carl Jonas Love Almqvist. Please Log in to get the full view of Alex Dictionary of Authors.