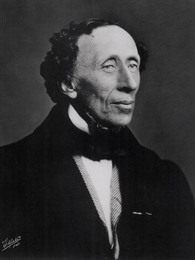 The presentation was last updated October 8, 2019

Hans Christian Andersen is Denmark’s best-known author. Born in Odense on the island of Funen, he had an extraordinary writing career that went from working class boy to famous writer. His father was a "free" cobbler, that is to say he was not a member of the cobblers' guild. He fought against Napoleon, and when he returned a broken man Andersen's mother, a washing woman, was forced to provide for the family as best she could until she died an alcoholic in 1833. There were few opportunities for children from this kind of background, but one night the young Hans Christian happened to see a troupe from the Copenhagen Royal Theatre perform in Odense. Deeply impressed he wanted to go to the capital and become an actor, and his mother let him go after he had been confirmed in 1819. Legend has it that she first asked advice from a fortuneteller who told her that Odense would later shine in his honour. It sounded like an unlikely fate, but it was all she needed, and many years later the prophecy came true.

This is an abbreviated version of the article about H.C. Andersen. Please Log in to get the full view of Alex Dictionary of Authors.