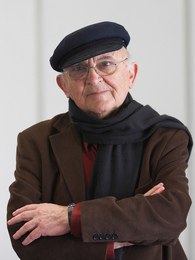 The Jewish author Aharon Appelfeld is widely known in Israel and his books have been translated into many languages. He was born into a German-speaking middle-class family in Cernăuţi, capital of the German-speaking province of Bukovina in Romania, now Chernivtsi, Ukraine. They were assimilated Jews who primarily thought of themselves as Europeans, but to the Nazis they were simply Jews. The mother was killed in the presence of Aharon, who was eight years old at the time. He and his father were taken to concentration camps in Transnistria, but Aharon soon managed to escape and hid in the countryside alone for three years in the care of prostitutes and former mental patients; he would never have survived without them. The Russian army arrived when he was twelve years old. He joined them and spent a formative year working as a kitchen boy. He came to Palestine via Italy in 1946. He met his father again in the 1950s, after the creation of the State of Israel. Aharon had no formal education when he arrived in the new country where he learned Hebrew. He subsequently started to write in Hebrew and he taught literature at Ben-Gurion University of the Negev in Be'er-Sheva.

This is an abbreviated version of the article about Aharon Appelfeld. Please Log in to get the full view of Alex Dictionary of Authors.