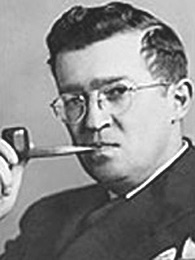 The presentation was last updated August 9, 2021

American journalist and magazine editor, who studied at Northwestern University, Evanston, Illinois, and graduated in 1902. After that, Edwin Balmer went on to Harvard University, Cambridge, Massachusetts, graduating there in 1903. That same year, he got a job with the Chicago Tribune, but in 1927 became the editor for the prestigious magazine Redbook, a position he retained until 1949. He was married to Katharine MacHarg from 1909 until her death in 1925; they had three children. He then married Grace A. Kee in 1927, a marriage that lasted until his death. Balmer’s first published book was the crime story Waylaid by Wireless (1909), and for fifty years he wrote mainly crime and science-fiction stories, both on his own and together with his brother-in-law William MacHarg (1872–1951) and later with the sci-fi author Philip Wylie (1902–1971). Balmer and Wylie started by jointly writing a detective story, Five Fatal Words (1932), but it was their two sci-fi novels When Worlds Collide (1933) and After Worlds Collide (1934) that first attracted attention. The former title was also turned into a film.

This is an abbreviated version of the article about Edwin Balmer. Please Log in to get the full view of Alex Dictionary of Authors.