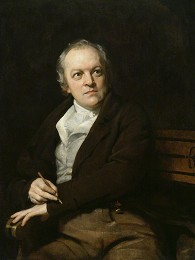 The English author and artist William Blake was born and spent most of his life in London. His father was a hosier, but his son was neither interested in following in his father’s footsteps nor in attending school. He began to see angels from early childhood and he had a life-long interest in mysticism that led him to the Gnostics, the Kabbalah, Paracelsus and Swedenborg. When he was fifteen, Blake became an engraver’s apprentice, and in 1778 he was admitted to the Royal Academy of Arts in London. He never completed his studies, partly because of his job at the engravers and partly because he rebelled against the school’s president. In 1782, he married the self-effacingly loyal Catherine Boucher who became an invaluable support to him. Together, they produced etchings and engravings for his own books and illustrations, for the Bible and for the works of, for example, Dante, Shakespeare and Milton. This was not a lucrative business, and they made no profit from the only exhibition they mounted in 1809. Blake was usually broke, apart from occasional contributions made by his benefactors.

This is an abbreviated version of the article about William Blake. Please Log in to get the full view of Alex Dictionary of Authors.