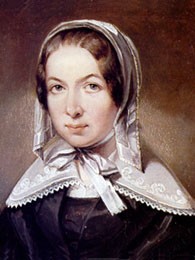 Fredrika Bremer was born in 1801 in Turku, Finland. As an author, she has been very significant for women's rights issues. Bremer belonged to a wealthy bourgeois family, her father being an ironmaster. In 1804, the family moved to Stockholm, and the next year they took up residence at Årsta castle in Österhaninge. Bremer was raised according to the spirit of the time to become an attractive woman on the marriage market. Her education included studies in various languages as well as history and geography. Art, music, and dance were also part of the educational basis for a woman of the higher classes. She continued painting also as an adult.