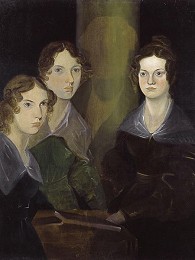 From left to right: Charlotte, Emily
and Anne Brontë
Painting by their brother Branwell

Anne Brontë was the youngest and least known of the three Brontë sisters. She grew up together with her sisters Charlotte and Emily and her brother Branwell in a vicarage at Haworth, Yorkshire. She was close to Emily and she liked to walk on the moors. While Charlotte and Branwell fantasised about their imaginary world, Angria, Anne and Emily wrote a journal together and fantasised about their own imaginary world, Gondol. The sisters later began to write poetry. The children were looked after by an aunt and Charlotte after the death of their mother when Charlotte returned from her school Roe Head in 1832 in order to teach her sisters at home. Anne worked as a governess on and off between 1839 and 1845. Even though she apart from her two novels wrote a lot of poetry, little remains of her production. She was asthmatic and died of tuberculosis less than a year after her second novel was published. She was buried at Scarborough.

This is an abbreviated version of the article about Anne Brontë. Please Log in to get the full view of Alex Dictionary of Authors.