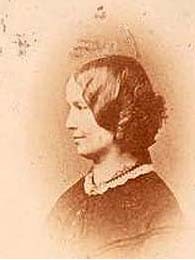 Charlotte is the only Brontë sister who was acknowledged as an author by her contemporaries. She grew up together with her five siblings in Haworth vicarage on the Yorkshire Moors. Her mother died at the age of thirty-eight and her two older sisters, Maria and Elizabeth, died early of tuberculosis after having suffered the poor conditions of the Clergy Daughters' School in Lancashire. Helen Burns in Jane Eyre (1847) was inspired by Maria, and Lowood School is based on the Clergy Daughters' School. After their mother died, her sister and Charlotte were charged with looking after the children. They were educated at home – their library included the works of Sir Walter Scott and Lord Byron – and the sisters began to write stories and poems of their own at an early age. Charlotte attended Roe Head School in 1831–1832, and she later returned to teach there between 1835 and 1838. In 1842, she travelled to Brussels with her sister Emily to study languages, but she was forced to return home when their aunt died. She went back the following year. Emily, Anne and their brother Branwell all suffered from tuberculosis and died within a year of each other, leaving Charlotte the only surviving sibling. In 1854, she married her father's curate, Arthur Bell Nichols. She died one year later.

This is an abbreviated version of the article about Charlotte Brontë. Please Log in to get the full view of Alex Dictionary of Authors.