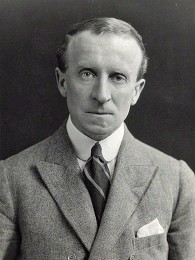 John Buchan, 1st Baron Tweedsmuir, was a Scottish author, politician, lawyer, historian, editor and diplomat. At his death he served as Governor General of Canada. Some of his works are still in print, and he is considered one of the pioneers of espionage fiction. His best-known work is the classic spy novel The Thirty-Nine Steps (1915), which has been adapted for the screen numerous times including in 1935 by Alfred Hitchcock.