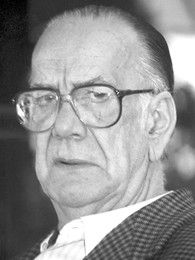 The presentation was last updated June 22, 2018

Spanish author, born in El Padrón, a small village in the province of La Coruña in northwestern Spain. His father, Camilo, worked as a geography teacher, customs officer, and writer. His mother, Camila, was born in Spain, but her parents were English. The author has a son who is also called Camilo José. The latter is a university professor and has written a biography of his father. Cela studied philosophy, medicine, and law at the university in Madrid in 1933-36 and 1939-43, but never obtained a degree. In 1936 he was a student and a poor and ill poet - a few years earlier he had spent some time at a sanatorium for pulmonary tuberculosis. This year the Spanish civil war started as the nationalists revolted against the republican government that had been elected by the people. The leader of the revolt was Francisco Franco with the very right-wing Falange Party as his ideological basis. The young Cela enlisted in the Nationalist Army, was seriously injured, and spent a long time at hospital. After Franco’s victory in 1939, which resulted in a hard dictatorship, Cela, however, very soon joined the opposition. At this time he completed his first collection of poems, Pisando la dudosa luz del día: poemas de una adolescencia cruel. It was first published in 1945. During his varied life, Cela also managed to work as a bull fighter, civil servant, painter, actor, and director of a pharmacological periodical and a religious magazine. In 1954 he moved to Mallorca, where in the years 1956-79 he published the respected monthly literary magazine Papeles de Son Armadans, where many of his own texts were published. The magazine became an important forum for young authors opposing Franco.

This is an abbreviated version of the article about Camilo José Cela. Please Log in to get the full view of Alex Dictionary of Authors.