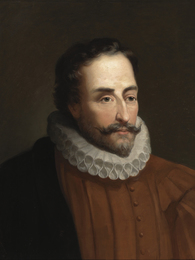 Spanish author, born in Alcalá de Henares. Although coming from a noble family, his father was a poor barber-surgeon. During Cervantes' childhood, his family moved around between different cities. In 1559, he went to Rome, in the service of a Spanish cardinal, but the next year he enrolled in the army and fought among other things in the war against the Turks. He was wounded in the battle at Lepanto in 1571 and his left arm remained paralyzed after this. In 1575, he was captured by pirates and lived for five years in hard slavery in Alger. After several attempts to escape, he was redeemed in 1580, and he returned to Spain and Madrid. After his return, however, he did not manage to get a public office. (His greatest dream was apparently to go to America as a colonist, but he was rejected by the Crown.) Instead, he began to write, making his debut in 1585 with Galatea (Galatea), a pastoral novel in the style of the time. For many years, Cervantes lived in poor economic conditions. For a period of time, he lived in Seville, where he acted as a collector of funds for the armada for its coming settlement with England. In 1594, he became a tax collector in Granada. Later, he lived in Valladolid and finally in Madrid. (It should, however, be pointed out that Cervantes' biography has many puzzles in it. There also exists no authentic portrait of him.) His breakthrough did not come until 1605, with the publication of the first part of Don Quixote (El ingenioso hidalgo Don Quijote de la Mancha).

This is an abbreviated version of the article about Miguel de Cervantes Saavedra. Please Log in to get the full view of Alex Dictionary of Authors.