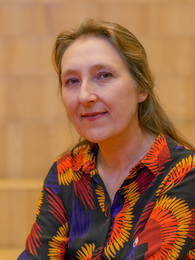 Marie Darrieussecq was born and grew up in a middle-class family in Bayonne in the Pyrenees. Her mother was a teacher of French and her father a technician. In her home, there was never any talk of politics or history, and the silence of her home environment contributed to writing becoming a means of expression for her; already as a 6 year old, Darrieussecq knew that she wanted to become a writer. She read a lot and directed her energies towards literary studies from elementary school and onwards. She is a trained secondary-school teacher. During her higher education in Bordeaux, she studied among other things Roland Barthes. After finishing École Normale Supérieur, she taught the history of French literature, specializing in Stendhal and Marcel Proust. During a productive year in 1996, she studied psychoanalysis, wrote her first novel Pig Tales (Truismes), and finished her doctoral dissertation. She obtained her doctor's degree in 1997. Today she is a full-time author. Darrieussecq emphasizes that she is a feminist, but that she above all is an author and after that a woman. She has shown her political interest through a statement in the French press about why she voted on Ségolène Royal, and her answer was: "because she is a woman". Darrieussecq lives together with her husband and two children in Paris.

This is an abbreviated version of the article about Marie Darrieussecq. Please Log in to get the full view of Alex Dictionary of Authors.