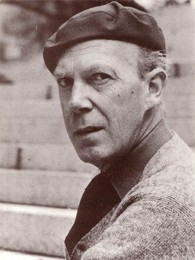 Swedish poet, born in Stockholm where he grew up in an upper-class family. The father worked as a stockbroker, but was psychologically ill and died when Gunnar Ekelöf was only eight years old, leaving a large fortune. Gunnar Ekelöf spent part of his childhood at a boarding school and children’s home and lived for some time with his mother abroad, among other things in France and Germany. Ekelöf graduated in 1926 in Stockholm and next pursued oriental studies at the School of Oriental Studies in London. He established a lifelong interest in Indian, Arabic, and Persian culture early on. However, Ekelöf interrupted his studies in London and spent the years 1929-30 in Paris studying music – as a youth he wanted to become a musician – and came into contact with the avant-garde circles of the time, both authors and visual artists. In Paris, he also began writing in earnest. In connection with the stock market crash in 1929, Ekelöf's economic situation became worse. He returned to Sweden and studied oriental languages in Uppsala without, however, taking a degree.

This is an abbreviated version of the article about Gunnar Ekelöf. Please Log in to get the full view of Alex Dictionary of Authors.