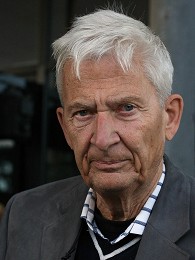 Swedish author, born and raised in a nonconformist environment in Hjoggböle, Bureå, Västerbotten. His father died early on and Per Olov Enquist, the only child, mainly grew up with his mother, a very religious elementary-school teacher. Enquist later pursued university studies in Uppsala and obtained a Master of Arts degree in 1960. He next worked as a literary critic for Upsala Nya Tidning (1961-1963), Svenska Dagbladet (1963-1966) and later for Expressen. In the 80’s, he lived for long periods in Denmark (Copenhagen), but now he lives in Vaxholm.

This is an abbreviated version of the article about Per Olov Enquist. Please Log in to get the full view of Alex Dictionary of Authors.