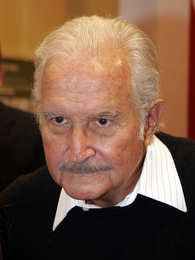 The presentation was last updated December 14, 2020

Carlos Fuentes Macías is one of Mexico's most prominent authors, even though he was in fact born in Panama. His father, Rafael Fuentes Boettiger – a Mexican diplomat who travelled all over the world – had a keen interest in literature and film. Fuentes mother, Berta Macías Rivas, was only eighteen when she married Boettiger. As the child of a diplomat, Carlos received an international education in several languages, and he lived in the United States, Chile and Argentina for long periods. He had a privileged upbringing and attended private schools all over the world, but he spent his summer holidays with his grandparents so he could be exposed to the Mexican culture. At the age of sixteen he went to live in Mexico for the first time where he attended the Colegio de México. He decided to become an author, but he realised that he would not be able to make a living from that alone. He read law at the Universidad Nacional Autónoma de México where he became a Marxist and joined a Communist party. He graduated in 1950 and went to work for the United Nations in Geneva.

This is an abbreviated version of the article about Carlos Fuentes. Please Log in to get the full view of Alex Dictionary of Authors.