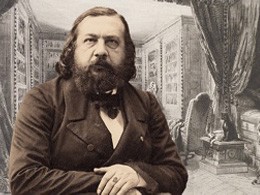 French author and critic born in Tarbes, Hautes-Pyrénées, to a family originally from Provence. His father was a minor government official. Gautier came to Paris as a child, and when he in 1829, at the age of eighteen, turned out to have an aptitude for art, he was allowed to abandon his education to become a painter. He soon changed his mind, however, after he became acquainted with Victor Hugo and his circle of friends. In 1830 he participated, on Hugo's side, in the battle of Hernani, a play set in Spain in the Middle Ages that marks the victory of Romantic drama over Classicism. The opening night at the Théâtre Français was tumultuous, not least on account of Gautier who aggravated the bourgeois audience with his long hair and loud red waistcoat that he had ordered specially for the occasion. A few months later he published his first poetry collection, Poésies (Poésies). Unfortunately, it appeared on the day the July revolution broke out, so it passed relatively unnoticed, but Gautier had already decided to put aside his brushes and pick up the pen.

This is an abbreviated version of the article about Théophile Gautier. Please Log in to get the full view of Alex Dictionary of Authors.