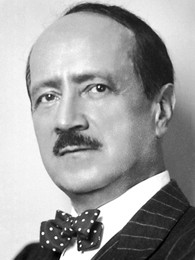 The French poet Saint-John Perse was born Marie-René Alexis Saint-Léger, the only son of five children born to a wealthy family in Pointe-à-Pitre on the island of Guadeloupe in the Caribbean where his parents owned two plantations. His father was a solicitor as was his grandfather. When the economic situation on the islands deteriorated and a new mayor, hostile to the colonial power, was elected, the family left Guadeloupe for France. They settled in Pau in 1899. Perse did well at school and went on to study law at Bordeaux with a break for doing his military service 1905-06. After graduating he read political science, music and philosophy in Paris, and in 1914 he became a press corps attaché. He was appointed French consul in Shanghai in 1916, then secretary to the French Embassy in Peking. Between 1921 and 1932 he was secretary to the French foreign minister Aristide Briand, and in 1933 general secretary of the French foreign office. Perse lost his position in the Vichy Government during the German occupation, was stripped of his French citizenship and all his possessions and his manuscripts were burned by the Germans. In 1940, he fled to the United States where he was offered the post of ambassador, which he declined. Between 1941 and 1945 he was offered employment at the Library of Congress, and he worked there between 1941 and 1945. Perse became an American citizen and remained in the United States until 1963. While there he married Dorothy Milburn Russel in 1958. His French citizenship was restored after the war, he returned to France at the end of his life and died in 1975 in Giens, Provence.

This is an abbreviated version of the article about Saint-John Perse. Please Log in to get the full view of Alex Dictionary of Authors.