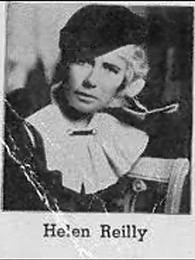 Critics often regard Helen Reilly as one of the most important female American crime writers of the 1930s. One reason for this distinction is that most of her peers at the time dedicated themselves to romantic suspense, while Reilly instead wrote a series of realistic stories about police work, told from the perspective of the cops themselves. Her main protagonist is inspector McKee of the Manhattan Homicide Squad, who is always accompanied by several different colleagues (including pathologists and technicians) who reappear in book after book. What we have with Reilly’s work, then, is a police collective, which makes Reilly an early name in the crime writing sub-genre known as "police fiction" or "police procedurals". Her books solid in large editions and she soon garnered a large number of fans.